I need your help promoting! Let me know your ideas/fees! :)

Because you are so awesome, I’m going to do a couple things here so as to help out the Lost Cause/Lost Causes

1) The Lost Records Hoodies/Shirts are now available on the online store. AND, they are on sale 🙂

2) As a thank you, there will be a bunch of songs available for FREE download on iLike. But keep on spreading the love! Email these songs to your friends, make a mixed CD, make a play list on iTunes…anything you can think of 🙂 Click here for free Billy the Kid downloads

3) For those of you who said you would help out by putting stickers on your car/desk/bike/house/guitar etc, let me know your address and I will send you some FREE stickers. Sound like a plan?

4) Last but not least, there are only a few Billy and the Lost Boys shirts left over and they are now on sale for $10 at the Lost Store.

PLEASE FEEL FREE TO POST COMMENTS TO ANY AND ALL BLOGS 🙂

A surprise birthday party can be a huge undertaking, and a substantial amount of work depending on how many friends the person has.

A person’s FIFTIETH birthday should essentially be the birthday that puts all other birthdays to shame. Not that there should be any shame in birthdays. Scratch that. Bad analogy hee hee.

My friend John Maksym has been a dear friend to me for a number of years now. John sings, writes and plays guitar in a band called Breaching Vista and is one of those guys who just gets out in the world and gets things done, y’know? In fact, he is the person who booked my very first solo show in Kitchener Ontario, where I ended up living for two years.

I should be clear that the main purpose for this leg of shows was to end up at my Canadian Music Week show in Toronto at the Rivoli. I figured “Hey, I’m gonna be in the area…let’s play some shows!” Long story short, I put out the call and within no time at all, I had ten shows. This is a testament to the collective of indie musicians in this country. No joke.

Booking my way back in time from the Toronto showcase landed me in Kitchener for (surprise surprise) John’s mom’s 50th birthday! There’s something about John’s family that seems to attract the touring musician (I blame the food. Okay, and the hospitality. Okay they’re all great to hang out with, too!) It should be duly noted that for all the hospitality June has extended to me and my various musical groups, being ASKED to play her surprise birthday was both an honor and a privilege.
The day commenced as such: Coffee! There’s a certain chain that is all over Ontario. I’m won’t mention any names but I think you know who I’m talking about. While this isn’t necessarily the best coffee in the world, it certainly brought back a ton of memories a.k.a. The Two Years I Lived In Ontario and Drank A Substantial Amount of Tim Horton’s Coffee.

Step two: Pick up birthday supplies! Picking up birthday supplies is a very fun endeavor. Anyone who doesn’t think this is fun is obviously not capable of fun. It is the funnest thing. We got huge custom balloon bundles for both Charlotte and June, as was a dual birthday, as well as streamers, birthday girl pins, banners…a whole bunch of awesome. We also picked up The World’s Coolest Cake from The World’s Coolest Cake place. See: photo.

Then it was off to decorate the venue, load in the PA and wait for the birthday girls to arrive!

I just hope my 50th birthday is half as fun as June’s…she spent the whole night dancing her heart out to her son’s band and I gotta say, it was one of my favourite shows I’ve ever been a part of. Thanks guys!!! 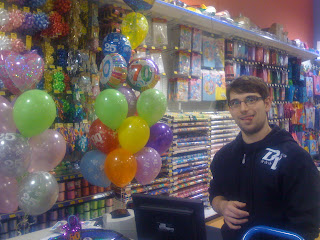 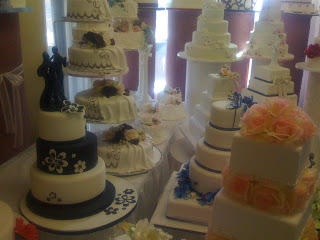 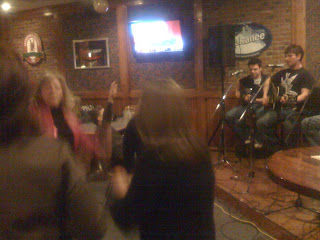